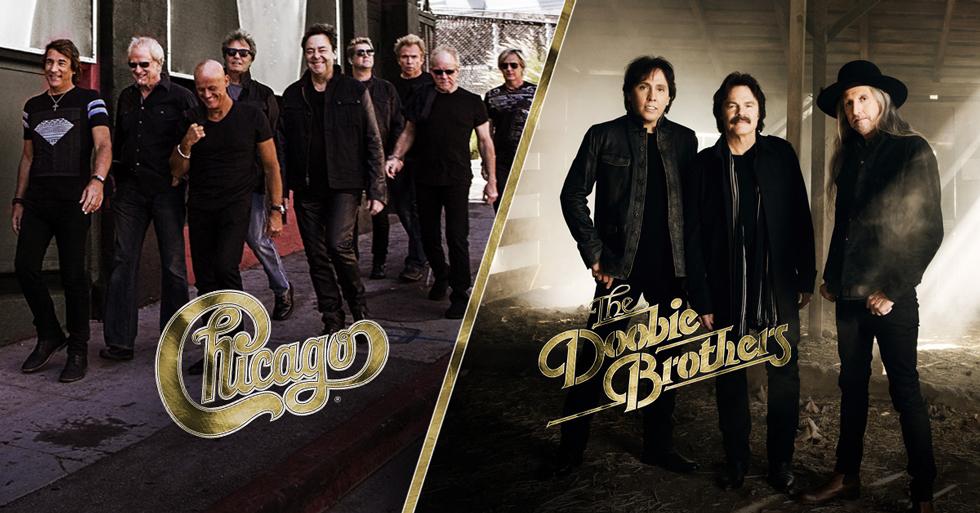 Two of the most successful and critically-acclaimed rock bands Chicago and The Doobie Brothers – who have sold more than 150 million records combined – announced today their co-headline North American summer tour kicking off June 7, 2017 in Concord, CA. The 30+ date tour, promoted by Live Nation, will take the Grammy Award-winning and multi-platinum selling groups through amphitheatres in major cities including Los Angeles, Chicago, New York City, Toronto, Las Vegas, Atlanta and Washington, DC for a night of unforgettable live music. The tour will conclude July 30, 2017 in Virginia Beach, VA.

“The perfect summer line-up, playing dozens of the best-loved rockin’ pop classics. I’m happy to be hangin’ out with our ‘Doobie’ friends… a great band,” said Robert Lamm of Chicago. “We’re excited to be touring with the Doobies again. I know we’ll have lots of fun,” adds Lee Loughnane. “Come see us in a city near you.”

“We are so excited to once again be sharing the stage with our wonderful friends Chicago! They’re a great band, and musically we fit together very well,” said Tom Johnston of The Doobie Brothers. “We know from past experience what a great show this is going to be for the audience. I’m sure there will be some fun musical surprises along the way too. It’s going to be a great summer,” adds Patrick Simmons.

Hailed as one of the “most important bands in music since the dawn of the rock and roll era” by former President Bill Clinton, the legendary rock and roll band with horns, Chicago – who celebrate their 50th anniversary as a band this year and were inducted into the Rock and Roll Hall of Fame in 2016 after receiving their first nomination – came in at #9, the highest charting American band in Billboard Magazine’s Hot 200 All-Time Top Artists. And Chicago is the first American rock band to chart Top 40 albums in six decades. Chicago’s album, Chicago Transit Authority, was inducted into the GRAMMY Hall Of Fame in 2014. Lifetime achievements include a Grammy Award, multiple American Music Awards, a star on the Hollywood Walk of Fame, a Chicago street dedicated in their honor, and keys to and proclamations from an impressive list of US cities. Record sales top the 100,000,000 mark, and include 21 Top 10 singles, 5 consecutive Number One albums, 11 Number One singles and 5 Gold singles. An incredible 25 of their 36 albums have been certified platinum, and the band has a total of 47 gold and platinum awards. Chicago have toured every year since the beginning – they’ve never missed a year. The band is now in their 50th consecutive year of touring, and continue to be true ambassadors for their beloved hometown, carrying the city’s name with pride and dignity around the world. The band’s award-winning documentary film, Now More Than Ever: The History Of Chicago, premiered on CNN on New Year’s Day 2017. Directed by Peter Pardini, the film is the most comprehensive history of the group’s achievements. Additionally, a remastered version of the band’s classic album Chicago II – CHICAGO II: STEVEN WILSON REMIX – will be available January 27.

The Doobie Brothers have been delivering mind-blowing, roots-based, harmony-laden, guitar-driven rock and roll for over four decades, selling more than 48 million albums and winning four GRAMMY® Awards. Their latest studio album, Southbound, features new recordings of the band’s biggest hits, with country music’s biggest stars including Blake Shelton, Zac Brown Band, Brad Paisley and Toby Keith. Boasting one of the most loyal fan bases in music, the band continues to write and record new material and tour the world. Their No. 1 singles “Black Water” (1974) and “What a Fool Believes” (1979), both gold, lead a catalog of indelible songs that include “Listen To The Music,” “Jesus Is Just All Right,” “Rockin’ Down the Highway,” “Long Train Runnin’,” “China Grove,” “Take Me In Your Arms,” Takin’ it to the Streets,” “Minute by Minute,” “You Belong to Me,” “The Doctor” and more. In all, the Doobies have tallied up five top 10 singles and 16 top 40 hits. Beginning with their multi-million-selling sophomore collection Toulouse Street (1972), the Doobies have 3 multi-platinum, 7 platinum and 14 Gold albums. Their Best of the Doobies (1976) has sold more than 12 million copies – a rare “diamond record.”